We are at this particular moment in history when we can say with certainty that open source hardware (OSHW) is economically viable. The video below tells the success story of Adafruit Industries. Barely formed, this business model relying on OSHW might already be obsolete. A new model, the open value network, is already threatening to transform the landscape of the open source economy. This article explains why.

Most people find it counter-intuitive that companies that sell high tech open source products can survive in a highly competitive capitalistic environment, giving away their recipes, AND allowing (even encouraging) everyone else to copy them, WITH THE RIGHT TO MAKE COMMERCIAL USE. If you don't believe that this is possible stop wasting your time arguing against it. It is real, it is here, you better understand it fast before the world becomes a strange place for you.

The business around open source innovation cannot be learned in school. It belongs to a new economic paradigm. Old arguments don't apply because the semantics and the logic are not the same. Some time ago, we published the article How to play the open game in the present and future economy, which tries to capture the essence of sustainable open source innovation. This article is constantly revised, so we encourage you to revisit it from time to time.

The most successful ventures built around OSHW, like Arduino, Adafruit, Sparkfun, etc., can only be understood within their larger ecosystem. We can identify two main structures: a commercial entity and a community. The commercial entity is a classical form, usually a corporation or a co-op. It takes care of manufacturing, insures quality, structures and integrates the feedback from the community into new products, nurtures the community, performs legal functions, integrates all the transactional logistics (storage, shipping, payment), and provides services. The community plays different roles: early adapters for products testing and providing feedback, consumers, propose new features , spread the buzz, educate new members of the community and even provide technical help, etc.

What we see in the case of OSHW is a greater integration between a commercial entity and its market. Traditional commercial entities maintain a provider-consumer relationship with their markets: some "smart" individuals within the firm study what consumers might need, pass that to a team of engineers to make it, and put it for sale with a team of marketing wizards who will make almost anything look like the perfect fit. If the firm was right about the need, which is not always the case, customers pay for it and take it, and ask for service if needed. Service is provided by the commercial entity in exchange of customer loyalty. In this approach, the consumer is educated about what he needs and wants, after the "smart guys" have made the market study, decided on the general need, and offered a one-fit-all solution. This is obviously the extreme case, or what was widely practiced 20-15 years ago.  Today, traditional corporations build communities around their brands, and they try to absorb more feedback from their consumers. In the case of OSHW, individual consumers drive design and development.

This integration between the commercial entity and the market in the prevalent OSHW models is made possible by the internet technology. But as we saw above, there is still a clear distinction between the commercial entity and the community. For example, a community member who proposes a new design that becomes commercially successful is not rewarded with a fair share of the profits made by the commercial entity. I call this the "candy economy", meaning that the members of the community around a OSHW company stick with it and contribute mostly for intrinsic motivations, and a small present (a candy) or a token of recognition from time to time.

Is this division between the commercial entity and the community necessary? Or is it an impediment for a better arrangement?

The open value network model abolishes the distinction between
the commercial entity and the community!

The open value network is a model for commons-based peer production. See SENSORICA as an example. 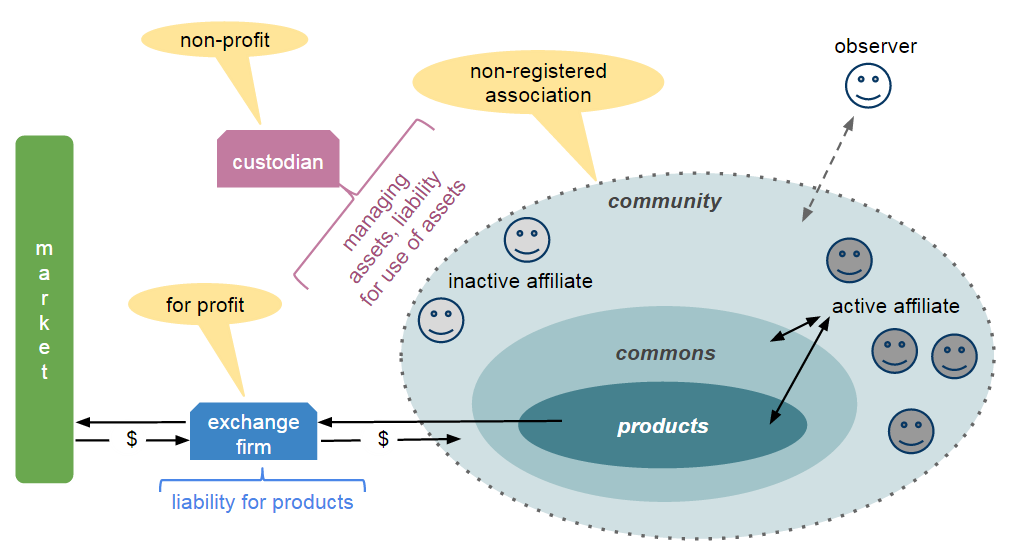 The diagram above depicts the structure of a value network. The physical and the virtual infrastructure, as well as the tools and the equipment used in R&D and in production are part of a pool of shareables, legally owned by a custodian, which is bound by a contract to act in the interest of the community, obeying a set of predefined rules set by the community. All the information and the knowledge generated by the value network become part of the commons (there is no intellectual property). Affiliates (agents) rely on their know how to create value (products), using these resources. This value (products) is exchanged on the market for some form of revenue. The revenue is redistributed among all affiliates in proportion to their contributions, using a value accounting system. The barrier to participation to value creation processes is very low. In that sense, the value network is open. Value creation is so widely defined that it encompasses activities usually performed by members of the commercial entity and the community, in the prevalent OSHW model cited above. Therefore, the two structures, the community and the commercial entity are merged together at the level of value creation.

The open value network model distinguishes between different types of agents, based on their degree of involvement/participation. Thus, we can distinguish between active affiliates (those who take part in value creation) and unaffiliated observers (those who know what's going on in the value network). If we go back to the prevalent OSHW model cited above, we can say that the owners and the employees of the commercial entity, as well as the community members who provide feedback and new design ideas, or who actively propagate information about products are ALL active affiliates.

We also need to note that active affiliates are those individuals who participate in value creation AND who decide to log their contributions within the value accounting system. Participation in the value accounting system is NOT mandatory. Someone can elect to contribute to the value network without expecting something in return. Thus, the open value network integrates a gift economy with a market-oriented economy.

That is all fine on the value production side, but what about the distribution side, or the market side?
All the transactional logistics (for the exchanges between the value producing network and its market) and the legal aspects associated with it are moved into what sencoricans call the "Exchange firm", which can be embodied as a non-profit, with the sole purpose of serving the value network.

So why is the open value network a menace to current OSHW business models? Because by abolishing the distinction between the commercial entity and the community, value networks like SENSORICA threaten to drain these communities associated with OSHW-based firms of their talent!

The open value network model departs from capitalism for 3 main reasons:
The value accounting system allows value networks to go beyond the gift economy AND beyond the candy economy.

Other ways to view this blog: Timeslide, Sidebar.
Home Site
FORUM
Our bookmarks